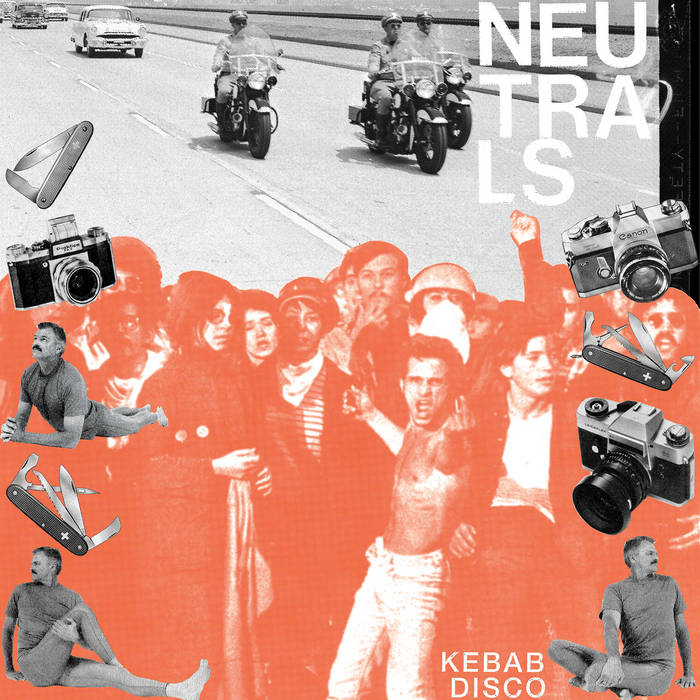 Kebab Disco is the debut LP from Bay Area trio Neutrals, following the release of two well-received promotional cassette demos. On the album, the group channels a wide range of 70s and 80s punk, post-punk, and indie pop influences.

In the accompanying zine/lyric booklet, the band describe the first side of the record as “the art school suite”: the action kicks off in Glasgow, Scotland, with tales of artistic jealousy, petty theft, late night psychedelic excursions, burgeoning romance, and a betrayal. By the beginning of side B, the protagonist has emigrated to the perceived mecca of San Francisco, only to be met with ghosts of the past, a shifting demographic, and a self-satisfied post-counterculture consumerist class. While not strictly autobiographical, this mirrors the personal experience of Scottish singer/guitarist Allan McNaughton.

“Paying some serious stylistic debts to the transitional period between post-punk and C86 in the early-to-mid ‘80s UK underground—had they actually existed back then, NEUTRALS could have fit on the Cherry Red roster next to the MONOCHROME SET just as easily as they could have on Creation Records alongside MEAT WHIPLASH.” – Erika Elizabeth, Maximumrocknroll

Bandcamp Daily  your guide to the world of Bandcamp